This condiment, with ancient roots, was used to preserve fish for longer, thanks to vinegar and sugar. In fact, fishermen’s families used to season the tuna like this when they had to be at sea for a few days. The cultural and economic history of Sicily is closely linked to the presence of tuna. The first communities in what is now Trapani were already engaged in fishing and in May and June in fisheries for tuna in particular. The schools of tuna (of the species Thunnus thynnus, Atlantic bluefin tuna), in fact, migrated in the Mediterranean Sea in search of warm waters through the Strait of Gibraltar only during the period of reproduction. Catching a tuna meant having a large amount of food, which could be preserved thanks to salting. Phoenicians and Greeks who colonized the island introduced new fishing techniques (using vegetable nets), but only in the period of Arab domination tuna fishing became a real industry characterized by rituals of songs and practices. The creation of the tonnara (tuna trap) was revolutionary, an underwater system of nets anchored to the seabed that form a series of communicating sections where groups of tuna captured are guided to the so-called death chamber. In Saracen Sicily there were six tuna traps: in western Sicily they were active in May and June, in the eastern one, called return traps, in July and August. Tuna, therefore, was a seasonal food and only a small part was consumed fresh: Arabs developed new conservation techniques, introducing, in addition to the already existing salting, drying and smoking. Spanish continued to invest in tuna fishing: from the XV to the XVII century there were at least thirty-five tuna traps in operation. Then, with the Florio family, that bought many tuna traps in the early XIX century, the tuna fishing industry reached its peak. After the tuna trap of Favignana, Ignazio Florio senior bought in 1874 the entire island and built the first modern plant for the conservation of tuna: new working processes, boiling, preservation in oil and canning were introduced. That’s how the can of tuna, as we know it today, was born. Although from the early XX century the traditional tuna fishing has slowly fallen into disuse, also because of intensive industrial fishing, tuna is still the protagonist of many typical recipes of Sicilian cuisine. In Palermo, and not only, May is the month in which the fishmongers at the food market abbanniano (promote) the freshness of the bella tunnina (tonnina, female tuna; in the feminine because the female specimens are considered the finest). Traditionally the tunnina ca cipuddata is prepared with the fattest part of the belly of the tuna – surra – and white onions. It’s always present the scent of mint in many preparations based on tuna. 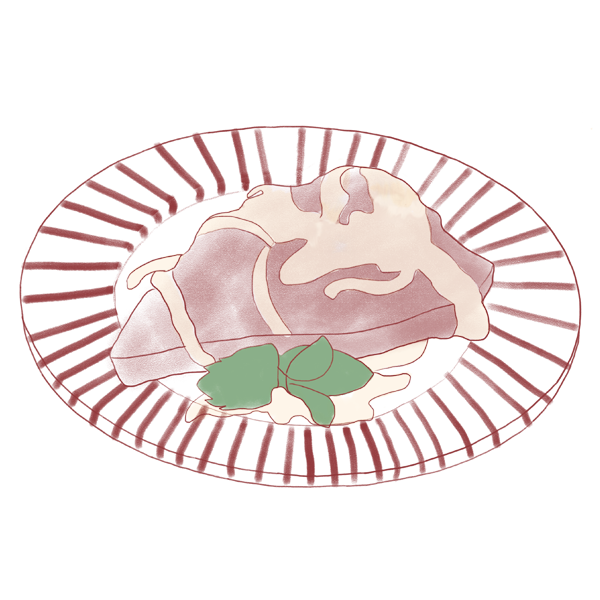 Cut the onions into not too thin slices. Pour a little oil in a pan, then add onions, salt and cook over medium heat. Once they’ve softened, add sugar and vinegar. Stir until the sugar has dissolved, remove from heat and add the chopped mind. Flour the tuna steaks and cook, not too much, in a pan. Salt and dry with paper towels to remove the excess of oil. Add the tuna steaks to the sweet and sour onions and mix. Add salt and pepper. Let it rest before serving.