Sfincione, bread pizza with a high and soft dough, is one of the most representative foods of Palermo. The ingredients, tomato, anchovies, onions, breadcrumbs and caciocavallo cheese, create with harmony a unique flavor that recalls the typical taste of the Sicilian capital.

For some scholars its name comes from the Latin spongia (from the Greek spòngos), sponge, for others from the Arabic isfanǧ, a bread pancake suitened with honey (similar to the sfincia, typical Sicilian sweet). Both hypotheses agree in identifying in the particular leavening of the dough, in its sponginess which reminds that of a sponge, the characteristic that defined up to the present the term sfincione. The recipe of the sfincione has undergone significant changes over time, until reaching its present. Its most famous precedent codified in recipe is probably that of the nuns of the Monastery of San Vito, situated near the Mercato del Capo, today pertaining to the domain of the State. It would be its piatta, the sweet or salty delicacy in which each monastery was skilled in producing. Legend has it that the nuns of San Vito decided to prepare a different bread, richer than usual, for Christmas. The recipe included a condiment with chicken entrails (guts, chicken liver, lung, but also cockerel crests, wattles and tongues) stir-fried in a pan, placed on a soft and airy dough with pieces of fresh caciocavallo cheese, covered with a béchamel sauce with peas. A sprinkling of breadcrumbs and grain of almond to complete the preparation. The sfincione of the monastery of San Vito was exclusively for the nobility of Palermo and it was in the cookbooks of the Monsù. In this regard it is interesting an anecdote about the origin of the sfincione of Bagheria, a well-known territorial variant. It is said that after the move of Prince Giuseppe Branciforte of Butera from Palermo to Bagheria, his Monsù modified with local ingredients (anchovies of Aspra and the tuma of the local dairy in place of the béchamel sauce) the recipe of the nuns of the monastery of San Vito, until then faithfully reproduced (the sfincione of Bagheria still differs from that of Palermo for the use of tuma and/or ricotta cheese and the absence of tomato). As with many noble recipes, even the sfincione of the Monsù was reproduced in popular cuisine with less expensive ingredients such as anchovies, onions, breadcrumbs and, when available, cheese. One of the essential ingredients was still missing: the tomato. Only since the early XX century, when tomato became an affordable product, the sfincione appeared in the red version, which will become, after the World War II (and with the further lowering of the price of the tomato) the most popular. Traditionally the sfincione was prepared in domestic kitchens during the Christmas Eve (Feast of the Immaculate, Christmas, New Year, Epiphany) or for the appuntamentu, the engagement party at the bride’s house. It was therefore a festive and sharing food. Today the sfincione is daily in the bakeries and it cannot miss on the tables of the Palermo people at Christmas time. The smaller version of the sfincione, sfincionello, is a pillar of street food in Palermo: It is said that it was born out of the creativity of the street vendors of Porta Sant’Agata who decided to sell the typical food in single portion. Sfinciunari (street vendors of sfincioni) pushed carts through markets and streets by hand, abbanniando (promoting) their food. Over time, the carts were replaced by lapini (three-wheeler motor vehicles) and sfinciunari began to get around the city announced by a recording that is always the same: “Chi spicialità vieru di sfinciuni! Càvuru è bbellu vieru, Chi cciàvuru! Uora u sfuinnavi, uora! Sunnu cosi i caprìcciu vieru, chi cciàvuru! Chi bbellezza vieru di sfinciuni! Eè, è bbellu càvuru, è bbellu vieru, chi cciàvuru! Uora u sfuinnavi, uora!” (“What a real specialty of sfincione! / Warm is pretty good, what a nice smell! / I baked it right now! / What tasty things, what a nice smell! / That goodness! / Hey, it’s really warm, it’s a true goodness, what a nice smell!”). The author of the réclame, fixed in the echoic memory of Palermo, is Giuseppe La Torre known as Pippinu u sfinciunaru, a famous vendor who go around with his lapa (three-wheeler motor vehicles) promising customers the best sfincione in the whole city. The sfincionello with the characteristic tomato slice in the center, is one of the most appreciated and consumed street foods. Famous is the laboratory of Piazza Sant’Isidoro alla Guilla, jokingly called headquarters of the sfincionelli, where from five o’clock in the morning, in addition to vendors, who daily get supplies, you see guys that conclude the evening by taking a cavuru cavuru (very hot) one. 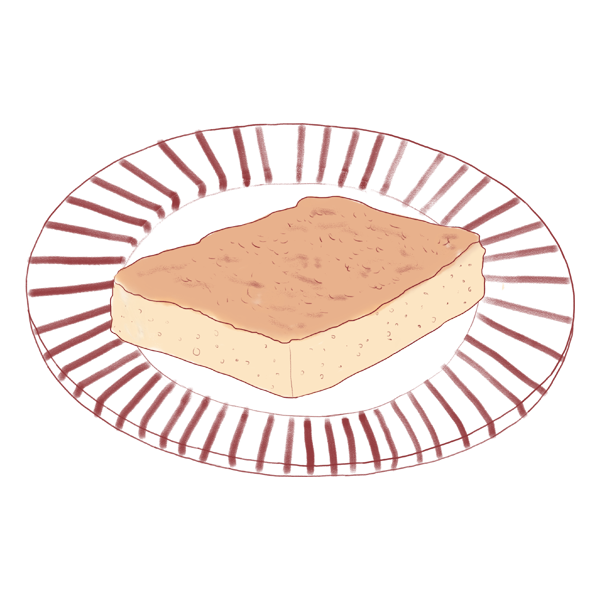 Mix the two sifted flours and place them on a work surface to form a volcano-like shape. Add into the center the yeast dissolved in a little warm water, oil, salt and sugar. Knead gradually adding warm water until you get a very soft, homogeneous and elastic dough. Place the dough covered with a kitchen towel in a bowl and let rise for two hours. Cut the onions into thin slices and brown them slightly in a pan with extra virgin olive oil. Add the tomato sauce, a pinch of sugar, salt and pepper and cook for about twenty minutes. After two hours of rising, knead again and let rest for another hour. In a pan, toast the crumbled soft-bread (or breadcrumbs) with a little oil. Grease the pan with the oil and spread the dough with the fingertips slightly greasy. Place the cubed fresh caciocavallo cheese and the anchovies pressing them in the dough gently. Pour the sauce, distributing the onions well, sprinkle with grated caciocavallo, toasted crumbled soft-bread (or breadcrumbs) and oregano. Drizzle with extra virgin olive oil and let rest for half an hour. Preheat the oven to 240° and then bake for 30 minutes.